In a previous post I talked a bit about how I was a contributor to the mlb-led-scoreboard project and how it landed me a job working for MLB for the 2021 season.

As you may recall, that project is to display MLB scores on an LED matrix panel that’s driven by a Raspberry Pi. 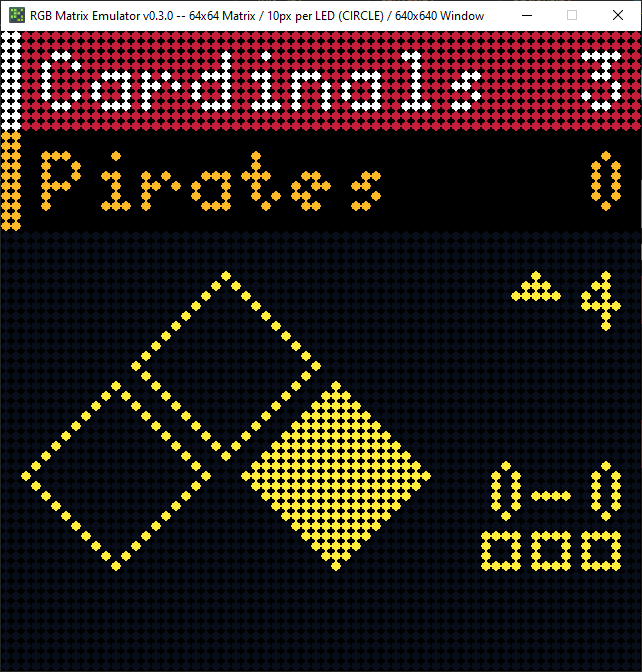 Embedded development is tough. And yeah, putting some code on a Raspberry Pi isn’t really an embedded system (since it runs a Linux distribution called Pi OS), but it shares some of the same characteristics that make development challenging. Consider:

(Side note: the cost of a new LED matrix setup including all the above is usually estimated at around $150)

This means lots of things can go wrong, both from an assembly standpoint (oops, I didn’t solder the HAT correctly!) and from a code perspective (i.e. the layout breaks on specific board sizes). Unfortunately, beyond a robust README, there’s not a lot that can be done about the first issue.

The second, however, poses a problem to the developer. I, for instance, run a 64x64 panel on a Raspberry Pi 3B+. When a bug report comes in saying that something is broken on a panel size that I don’t own, am I reasonably expected to shell out $50 to $75 (including shipping) for a new panel for an issue that doesn’t affect me personally? After all, without it, I’m basically completely unable to respond to the issue in a constructive way.

I decided this would be a good candidate for emulation. Essentially, my goal was to reverse engineer the rpi-rgb-led-matrix library (the code that drives all the LEDs) and write a replacement that could be dropped-in with minimal code change. This means I’m no longer bound by the hardware – panel size is configurable and it can run on different platforms (Windows, Mac, Linux, etc.).

The driver library was written in C++, but offers Python bindings, which is what a lot (all?) of the sports scoreboards use to drive their panels. For my emulator, I simply needed a Python package that had the same classes and functionality as the Python bindings in the original library and can draw pixels to the screen. Specifically, I’d need:

Step 1 is finding a library that can output graphics. I chose pygame. It’s been around 20(!) years and works with all the platforms I want to support, and the API seems simple enough to learn.

Next, I created skeletons of all the classes I knew I would need. I’ll only show the Canvas class, since the other classes simply write into its pixel buffer and then it can draw to the pygame window whenever the Matrix class calls SwapOnVsync.

(All these function names are the same as what’s present in rpi-rgb-led-matrix, so as long as the implementation matches, it’ll just work!)

This class simply takes an instance of RGBMatrixOptions which parses the command line arguments supported by the existing library and sets the canvas options as needed.

You’ll note the __pixels attribute – this is just a 2D array of colors. They default to BLACK, which for our purposes is OFF. Colors hold an RGB value and can either be a Color object or a tuple (I’ve seen some scripts use these interchangeably so I had to support that use case). Each value can be between 0 - 255.

Next, there’s a method for drawing to the screen, which simply creates a Rect in pygame of the correct size and location:

Notice the options.pixel_style… This way you can represent the LEDs as square pixels or circles!

Next, some functions to write into the pixel buffer at the correct location:

And finally, a method to update the screen with the canvas’s pixel buffer:

For drawing to the emulated panel, that’s all that you really need to do!

There are some helper functions to draw text, lines, circles in the graphics module, and I totally glossed over parsing BDF fonts to an array of pixels as well as using PIL to load images into the pixel buffer. Essentially, this boils down to the exact same thing – convert text, images, etc. into an array of color data and merge it into the canvas pixel buffer.

To integrate the emulator into an existing script, simply replace the import from the original library with the emulator library:

There’s also an addition to the RGBMatrixOptions class that allows overriding the default pixel size and shape from a configuration file. You can see what it does in the README.

Other than that, changing the size of the board is as simple as passing a custom --led-cols or --led-rows flag when starting a script!

This begs the question… One of the main points of emulation is that it behaves exactly like the emulated system. While I can’t say that the emulation is perfect, there have been some considerable successes:

Possibly the most entertaining – I got a bug report for the emulation code saying text doesn’t show up on the NHL LED Scoreboard when running on MacOS… Upon further inspection it actually turned out to be an issue with the PIL dependency. Not only was the bug not in my code, but it reproduced the issue from the real hardware on the emulator! 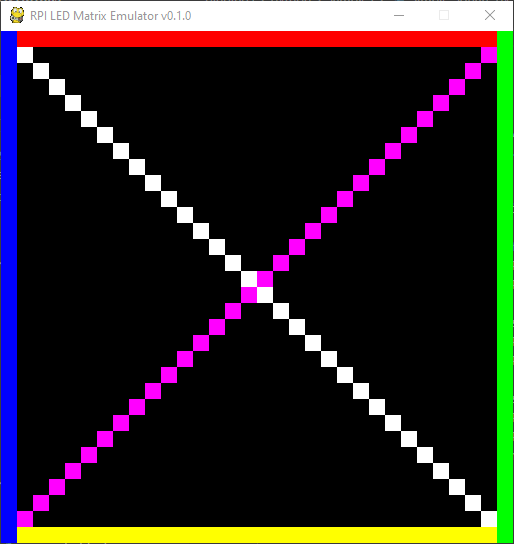 RGBMatrixEmulator is available on pypi, or you can check out the source code here.