On Keeping a Physical Engineering Notebook Why I keep a notebook and pencil around while coding -- and you should, too.

On my first day of work as a software developer I was given a notebook to jot down everything I was learning and everything I would need to keep track of. I think I might have even gotten a few pens out of the deal – at worst, there were some nice gel pens (Pilot G2 07 to be exact) in pen holders on all of the common area desks.

In my previous job as a salesman I used a notebook to keep track of customer orders and details that might potentially help close a sale.

Spoiler: it never did, and I’m a software engineer now. (You can read one of my first blog posts from around the time I made the transition here.)

Regardless, I don’t remember the company I worked for ever providing any stationery to tackle any of the aforementioned writing tasks. I’m almost positive I went to Walmart to purchase my own notebooks and pens. Since it only indirectly made me money, I was never incentivized to buy nice kit. The cheap stuff would do. The personal notebook I use now is probably one of those Walmart specials, and thankfully it’s almost completely filled.

Needless to say, the notebook I received at my new developer job was of much better quality than what I was used to. Today, I write in a nice teal Leuchtturm 1917, dotted rule. It’s overkill for what I needed, so I resolved to use it to the best of my ability.

But What to Write?

It looks like I started my first entry on September 9, 2019, which is a little strange given that I started work with my company in August. I can’t remember why I didn’t take more notes, but it’s clear that I would have benefitted from doing so right from the start. Fresh out of bootcamp, those first few days were like drinking out of a firehose, and it would have been nice to have some more physical documentation on hand.

Regardless of the aforementioned date discrepancy, you can definitely tell I tried to put a lot of work into those early pages. The diagrams are pristine. I might have even used a ruler to make straight lines in flow charts. And undoubtedly this was helpful to get my head around multiple interconnected systems that I would soon have a hand in developing. More importantly, it would help retain that information. 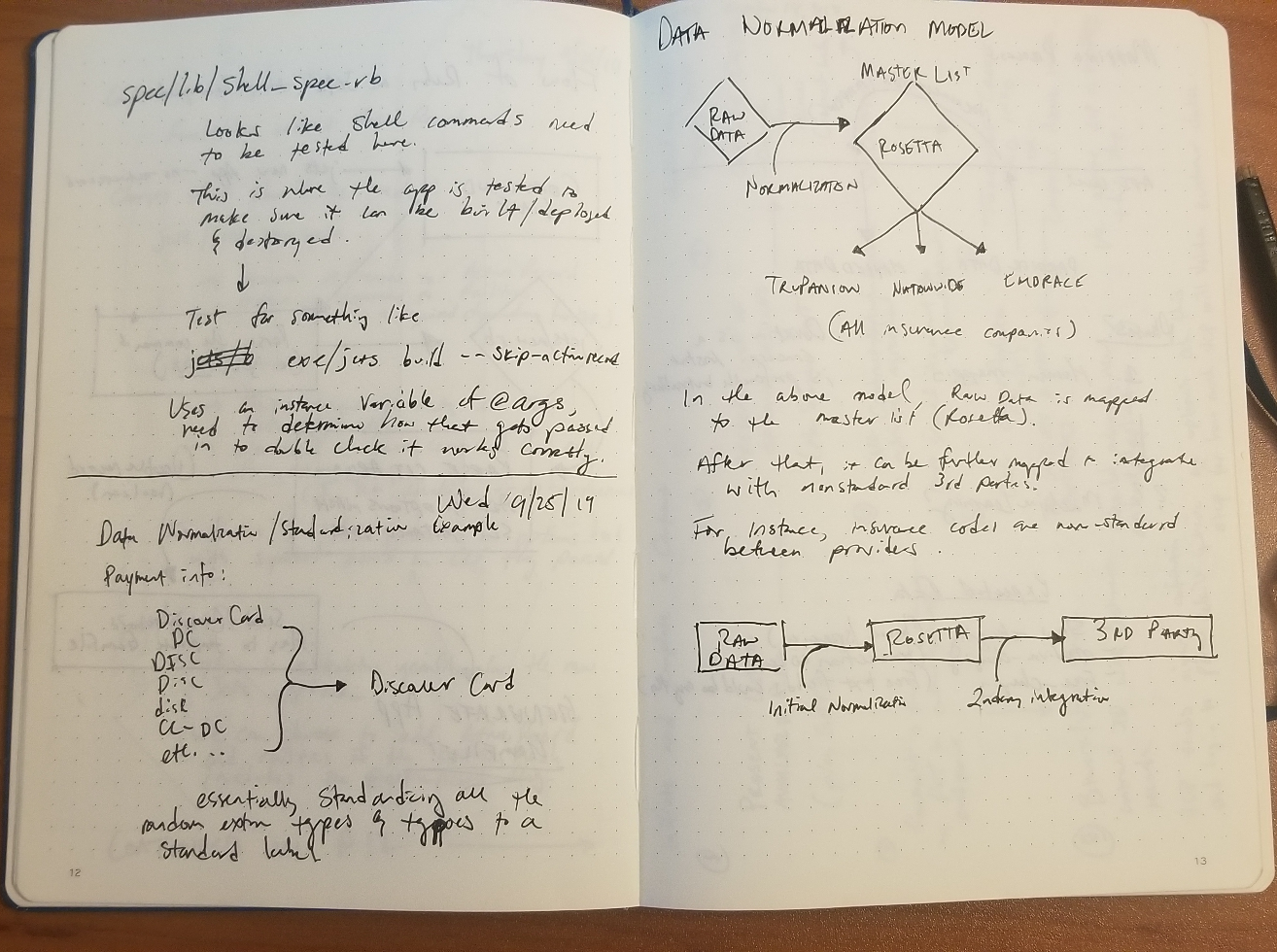 As I have progressed in my new job it has become abundantly clear that although I put a lot of effort into taking notes, I rarely ever went back to reference what I would call well-crafted, perfectly manicured and meticulous sections. Instead, I almost always got far more use out of the pages where I had unceremoniously used my fancy notebook as a glorified scratch pad. This depressed me to no end, so I stopped using the notebook in its entirety.

And then COVID-19 gripped the world.

In early March of 2020 (the 12th, to be exact), I was forced to start working from hom full time instead of our small office 5 days a week. Along with that came time-tracking, which we already did in the office. Unfortunately, I became more lax about it at home.

Out came the trusty Leuchtturm notebook.

It looks like I started time tracking in May, so I would have been working from home for a couple months at that point. Why there are such large gaps in my usage, I still have yet to understand.

At first, my notes were sparse and basic, sprinkled between daily time tracking entries. Later on, however, my team took on the task of sunsetting a large Rails monolith that was at least 10 years old and consumed most of our development time, and so we began documenting its core functionality in depth. Armed with our new documentation we’d re-write the parts of the application we still needed and outsource the rest to integrations with a 3rd party.

Around this time, my notebook was invaluable. I’d jot down things that needed documentation, where they were located, maybe a diagram of where the code existed within the repo, and then make a second pass to actually write coherent docs. What was interesting was that I still barely referenced the notes I’d taken once the documentation was complete, but my retention of concepts was increased tenfold.

What I had discovered was that by writing, I gained the ability to retain far more information than just by reading code.

You have to understand, although I do hold a formal college degree (in molecular biology of all things), this was my first foray into the world of software development and for some reason this simple fact had not yet clicked with me.

Nowadays, I draw all sorts of diagrams and take copious notes about damn near everything. My handwriting is terrible so none of what I write is ever legible to anyone else. I almost never re-read what I jot down. And so you may ask “What’s the point?” Well, it helps me grok what I need to know, and for me, that’s invaluable.

It’s definitely made me a better developer. I’ve noticed my retention of key topics has increased dramatically, and of course, there’s been a time or two when writing down what was said or done has saved my skin. Not to mention having the utility of a scratchpad at your fingertips.

I actually keep two notebooks now – one for work and one for personal use. 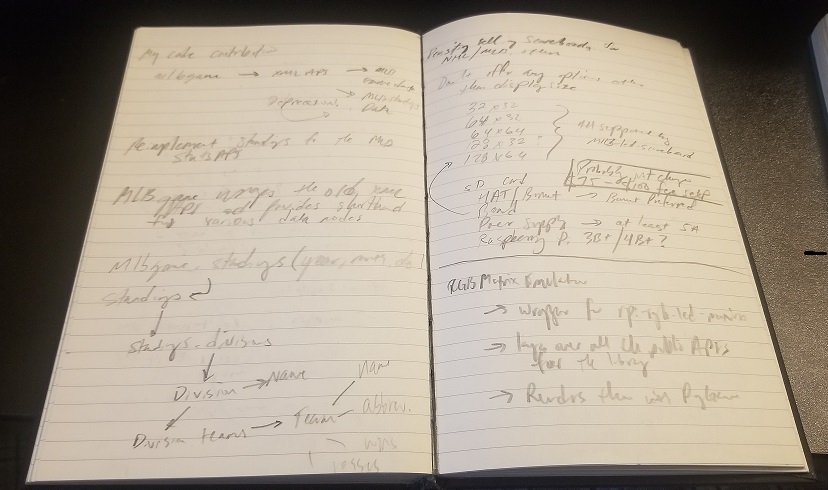 The above is an example from my personal notebook where I’ve written some notes about a project. I’m not sure I can even read what is written here. But that’s okay, it served its purpose.

Should You Take Written Notes, Too?

As if that wasn’t obvious already. I think there’s great benefit in taking a form of notes that doesn’t involve a keyboard. It forces your brain to process information in a different way, and that leads to better comprehension and retention down the line.

I’ve written this post with software development in mind, but that doesn’t stop you from writing down (or drawing!) just about anything from daily life.

I encourage you to write, when and about what notwithstanding. I’m sure you’ll reap the benefits down the line.

The Part Where I Geek Out About My Kit

This isn’t an endorsement for any of these products – they’re just what I use and enjoy.