Writing a Gameboy Game in 2021: Part 1 -- Graphics A deep dive into flipping cars and how the Gameboy renders them.

Before We Get Started

I should mention that Pocket League is written in C using the Gameboy Development Kit 2020. It’s tested on PC using BGB, but it also runs on a real Gameboy.

For the purposes of this blog, all the code was compiled with the help of GBDK and ran on BGB. I’ll bring up other tools as their knowledge is required.

Graphics on the Gameboy

Today I’d like to talk a bit about how the graphics for Pocket League work. More specifically, how sprites work, as they’re ultimately more interesting than how I made the backgrounds for the game.

I’m sure that was word salad, so lets open up BGB and look at the VRAM (video memory). If you’re playing along at home on BGB, you can right lick the game, then go to Other -> VRAM Viewer.

Whoa! Let’s ignore the bottom left quadrant – those are the background sprites, and we can talk about that in a bit. The top left quadrant is sprite data. Still – that looks pretty garbled. But why?

Well, as some have already guessed, the sprites for almost everything in Pocket League are larger than 8x8 pixels! They’re actually 4 sprites each, so 16x16 pixels. Here’s an example of the Player 1 car:

If you look closely, the first four sprites in VRAM correspond to the Player 1 car. The ball is exactly the same. In fact, the only sprites that aren’t represented by an array of four 8x8 sprites are the score numbers, the boost, and the player arrows.

Together, this means that when we need to move a car in Pocket League, we actually have to move FOUR car sprites (five if you count the boost trail, but we’ll get to that). Here’s how Pocket League draws cars to the screen:

First, we have to initialize all the tile data for the car. This data is generated by the Gameboy Tile Designer, which doesn’t look like much but lets me draw sprites and spit out the data inside a big array of hex values:

Next, actually put the data into GB memory:

And finally, move it around!

In the move_car_sprite function you’ll notice there’s a spr_offset which corresponds to the number of sprites that each car takes up (4 main sprites + 1 boost trail sprite). In theory this function supports an arbitrary number of cars, but in reality it’s not practical to have more than two.

But What About Rotating 16x16 Sprites?

You may be asking at this point how the car flips over, especially if you paid attention to that extra rot param in move_car_sprite. A little example of what I’m talking about:

If we know that each one of those frames is comprised of four sprites, how did it get accomplished? Let’s break that GIF out into a spritesheet so we can see what we’re looking at. 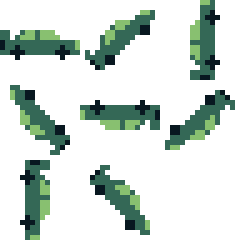 The astute observer will note that there are 8 sprites here, and 8 sprites x 4 tiles per sprite = 32 tiles total. If you look back at the BGB VRAM screenshot above (or the call to set_sprite_data(0, 24, car)), you will notice that in reality, there are only 24 tiles of graphics data loaded.

We’ve looked at the S_FLIPX sprite property above to flip the sprite horizontally for the entire car, but we can also do the same for the Y value using S_FLIPY. Some of the sprites in the sheet above were able to be culled because the sprite was simply a mirror image of another in either the X or Y axis.

Also, notice that since the car is rotating, each corner sprite of the car won’t correspond to the same part of the car as it rotates. For instance, considering Player 1’s car facing right, the sprites starting top right and moving clockwise are the windshield, front wheel, back wheel, and back windshield, whereas if the car is upside-down, the top right sprite is the back wheel. This means sprites will be assigned different tiles based on where it is in the rotation cycle, and so we can’t count on a useful constant offset like we did above for initializing the cars.

The first thing you should know about rotation is that Pocket League uses an 8 bit integer which can only have values of 0 to 255 to store the rotation value for the car. This seems weird until you consider that 256 is evenly divisible by 8 (the total number of rotation sprites we have).

During the game loop, holding left (or right) while in the air increments (or decrements) the rot value by the game’s ROTATION_SPEED (which I have discovered in writing this that I infuriatingly set to 15 instead of something sane like 16, which 256 is evenly divisible by). Let’s revisit the draw_car_roll function we saw in the move_car_sprite function with this new knowledge. Notice it takes rot as a parameter.

This is understandably a DAUNTING wall of code. Let’s step through it.

So we’re just allocating what we need, then updating them later. We need the quadrant the car is in, whether the sprites should be flipped, and what the sprite tiles are. Next, based on the quadrant, we’ll assign things:

And finally assign the tiles and properties. There’s some weird offsetting here to make sure that the sprites correspond to the correct car.

Boost, Ball, and Other Graphics

I’ll keep it simple here as there is much less going on with the other graphics:

All of the above should be visible in the VRAM screenshot above.

Honestly, backgrounds were an afterthought in this game. I was able to essentially open a graphics editor (MS Paint worked just fine), and the drop a 160x144 bitmap into Gameboy Tile Data Generator (gbtdg) to have it spit out the tilemap. Load it into my code and et voila, what you see is what you get.

The hardest part was lovingly editing the Rocket League logo to match the title.

Whew. We made it. I hope you’ve enjoyed this deep dive on the graphics of Pocket League. This was one of my favorite parts of coding the game and I think it turned out really well and captured the essence of the main game. There’s room for cleanup, but if it ain’t broke, don’t fix it.