Where I post about recent things I've learned that aren't large enough for a full blog post.

How to Deploy a Python Reddit Bot (and Other Scripts) to Heroku Configuring a bot to run within the constraints of Heroku's free tier.

Let’s start with a little about Heroku’s architecture. Heroku is one of the easiest PaaS (Platform as a Service) providers out there for web development, but it can also be used to deploy simple scripts very easily, as long as you know a little about how to configure it.

Adding a procfile to your code is really easy. You’ll need to create a file called Procfile (note there is no file extension) and add a bit of code to tell Heroku how to start your script.

For instance, if your script is main.py:

This tells Heroku you want to create a dyno called worker and when it starts up, you’d like it to run the command main.py.

While you’re here, you should also get a list of dependencies for Heroku to install. From a terminal, run pip freeze

This will generate the list and pin the dependency version, so Heroku knows which one to install.

This is one of the trickier sections. If you’re using PRAW, the normal config.ini should NOT be included when you push your code to GitHub. You can add a .gitignore file with the following:

This ensures your code doesn’t get accidentally committed to source control where people can potentially use it to impersonate your bot.

Unfortunately, this means you must explicitly handle logging into Reddit via environment variables when your bot starts up (don’t worry, it’s not hard):

You’ll need git in order for the next steps to work. Heroku relies on a project to be hosted on GitHub, and git is the tool to push code to it. You can download it for your system here if you don’t already have it.

Once that’s one, you’ll need to create a repository: 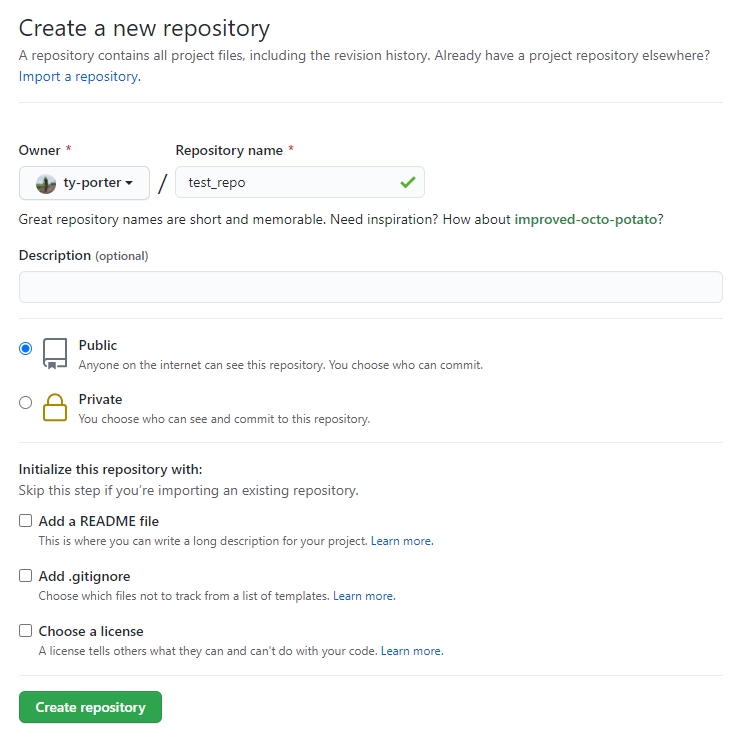 Next, follow the steps to commit your code to the repo.

You’ll want to create a new app on Heroku and connect it to your new GitHub repository. These steps should be fairly self-explanatory from the Heroku dashboard.

This part’s simple. Under the Settings tab, set your buildpack to heroku/python.

Next, you’ll want to add the environment variables you set up earlier to Heroku under your app’s Settings tab. On the left you’ll add the variable name, and on the right you’ll add the value. Mine are obscured for obvious reasons.

Under the Deploy tab, you should make sure your app deploys from whatever branch you’ll be using (mine is master, new GitHub repos default to main).

Once that’s done, you can watch the build process from the Overview tab. On completion, you just need to go to the Resources tab and turn on the worker dyno, and your bot will start right up!

For lots of bots and scripts, that’s all you’ll have to do. Keep in mind, this will keep running your script over and over for as long as the worker dyno is on, thus accruing dyno hours towards the free tier as things move along.

You can also check out my reddit-keyword-reports bot for some additional troubleshooting steps (note there is extra configuration present for this bot that’s not applicable to general scripts).